Download an interview with Larry Richmond, talking about the early beginnings of the WERC, in the Provincetown Banner August 12, 1976, which is archived on theProvincetown History Preservation Project's website. 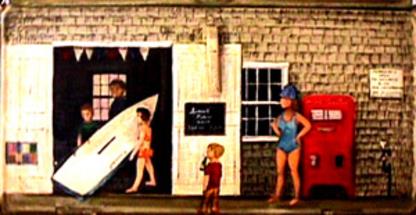 Remember this poster of the sign up sheet for the picnic that Wendy Everett made???

Here's a legible list of the 'kids' who signed up!

One of the Germain kids running after their Poodle, Popcorn

Begun in 1950 as a loosely organized gang of kids congregating at 'Flyer's beach', it soon became apparent to a number of parents that boats, a sailing program and a proper facility were needed. Francis Santos, Larry Richmond, Richard Santos, Frank Rogers, Joe Andrews, George F. Miller, Jr., Charles Shilowitz and Will Hurlbert  joined together to solidify a common goal. To give kids on the Outer Cape an opportunity to learn how to sail and enrich their lives with nautical knowledge and boating experience.  During the winters several handy fathers built small boats called 'Weasels' from kits and the fleet began to grow.  Calling on the generosity of local artists, paintings, drawings and sculptures were donated and raffles were held raising enough money to buy the waterfront property where the organization is  located to this day.  On June 21, 1957 the building was completed by builder Joseph C. Patrick for the princely sum of $4,126.40.  As the kids grew, so did the fleet with the addition of five Blue Jays built by Larry Richmond, Dick Santos and Lloyd Atwood. 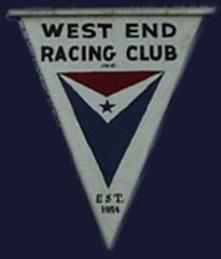 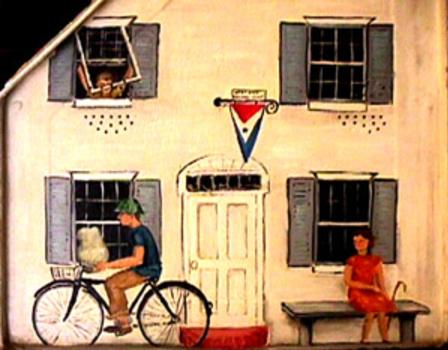 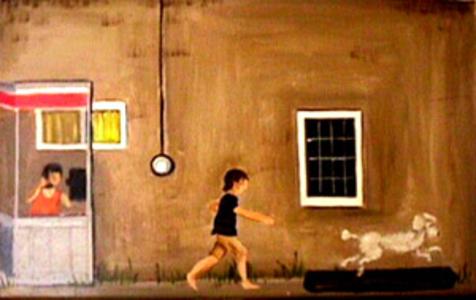 The original burgee of the West End Racing Club

Regularly scheduled hours were instituted, and Richard Santos became the instructor.  Kids learned everything from swimming and sailing to knot tying as well as team building, leadership, and good sportsmanship skills. Wendy Everett, inspired by all the sailing activity going on daily, designed and crafted an annual calendar that was sent to all kids registered in the program the previous season to remind everyone of the summer's noteworthy events.   Click here to see some of the  old calendars.   The accompanying illustrations on this page are photos of a breadbox that Wendy Everett hand-painted depicting various characters and memories of the early days at the West End Racing Club, re-named in 2017 West End Racing Children's Community Sailing. 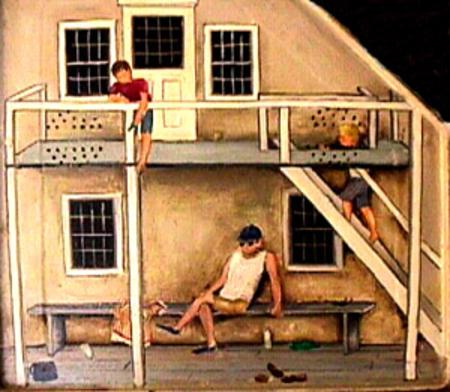 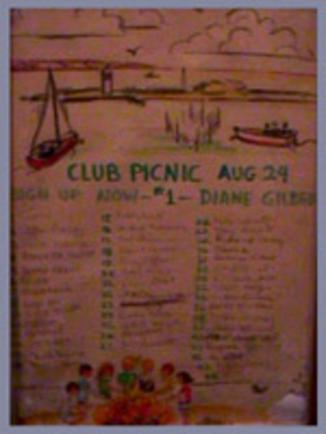 (For a more comprehensive group of photos from the early daysclick here.)

Download an article written by Jan Kelly in Provincetown Magazine about Francis 'Flyer' Santos that is archived on theProvincetown History Preservation Project'swebsite.

The organization has endured and been nurtured through the continued efforts of 'Flyer' Santos, his family and many, many others.   Enrollment has never been higher. Thanks to former neighbor Ann Maguire, teeshirt sales became a huge success. With a legacy that includes multiple generations of families, the West End Racing Children's Community Sailing (formerly the West End Racing Club) is proud of its heritage and its contribution to this small coastal town. In an effort to reunite many of us who have fond memories of our years growing up at the West End Racing Club, a celebration was held commemorating the 50th REUNION on Sunday August 13, 2000, designated West End Racing Club Day in a proclamation by the Provincetown Board of Selectmen. Click here to read more about the  50th Reunion  and see a photo collage.